The Five Generations of Computer 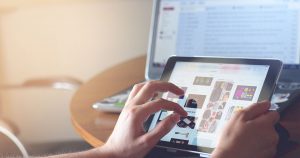 The first computers used vacuum tubes for circuitry and magnetic drums for memory, and were often enormous, taking up entire rooms.

In first generation computers, this operating system solve only one problem at a time. Input was based on punched cards and paper tape, and output was displayed on printouts.

The UNIVAC and ENIAC computers are examples of first-generation computing devices.

Transistors replaced vacuum tubes and ushered in the second generation of computers. The transistor was invented in 1947, transistors weren’t used significantly in computers until the end of the 1950s.

The development of the integrated circuit was the hallmark of the third generation of computers. Transistors were miniaturized and placed on silicon chips, called semiconductors, which drastically increased the speed and efficiency of computers.

The microprocessor brought the fourth generation of computers, as thousands of integrated circuits were built onto a single silicon chip.

The Intel 4004 chip, developed in 1971, which located all the computer components central processing unit (CPU), memory, input/output controls onto a single chip.

In 1981 IBM introduced its first computer for the home user, and in 1984 Apple introduced the Macintosh.

Fifth generation computing devices, based on Artificial Intelligence (AI), are still in development, though there are some applications, such as voice recognition, that are being used today.

The computer will have parallel processing in full fledge.
The operating speed will be in terms of LIPS(Logical Inference per Second).