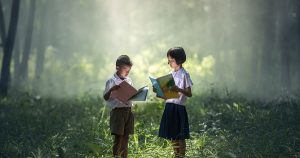 World Book Day or World Book and Copyright Day is a yearly event on April 23rd, organized by the United Nations Educational, Scientific and Cultural Organization (UNESCO), to promote reading, publishing and copyright. World Book Day was celebrated for the first time on 23 April 1995.

The connection between 23 April and books was first made in 1923 by booksellers in Catalonia, Spain. The original idea was of the Valencian writer Vicente Clavel Andres as a way to honour the author Miguel de Cervantes, first on October 7, his birth date, then on April 23, his death date.

In 1995 UNESCO decided that the World Book and Copyright Day would be celebrated on 23 April, as the date is also the anniversary of the death of William Shakespeare and Inca Garcilaso de la Vega, as well as that of the birth or death of several other prominent authors.