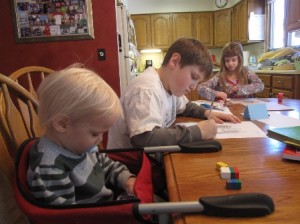 As the homeschool movement is growing and as outside interest in homeschooling is escalating, there are a number of myths about Homeschooling that have evolved. Based mostly on misinformation, these myths deserved to be dispelled.

Among the questions I get most frequently when I tell people that I was homeschooled, the question of socialization is the most prominent. Kids schooled at home just don’t get the same socialization skills that are developed at “normal” schools, right? They spend so much time with their families that they don’t’ know who to interact with their peers. This is definitely a myth.

Homeschool kids have multiple avenues to interact with their peers. Through church, youth organizations like 4-H, homeschool co-ops, and just hanging out with the neighborhood kids, homeschooled students have ample opportunity to be with their friends. In fact, most homeschoolers I know spend so much time doing the extra-curricular activities, in which they are surrounded by their peers, that they complain they don’t have enough family time.

Myth # 2: Homeschool Kids Do Not Get a Good Education

Another often asserted idea claims that homeschool students do not get a quality education. On this issue, empirical evidence speaks loud and clear. Homeschooled students generally score much higher than public schooled kids on the same standardized tests.

Myth # 3: Moms Who Don’t Have a Degree are Not Qualified to Teach

Opponents to Homeschooling often argue that the average mom is not qualified to teach her kids. Many moms think that they will not do an adequate job teaching their children if they didn’t go to school to be a teacher. This is simply not true. A degree does not make a good teacher. Any mom (or Dad) who is willing to put some work into her child’s education and is willing to learn with her child will be more than qualified to teach her child what they need to know. Plus, there are a host of books, seminars, conference workshops, videos, etc. available to help you grow in this area.

Myth # 4 Homeschooled Kids can’t get into College Homeschoolers had some problems with this in the past, but as more and more colleges are growing in familiarity with the homeschool movement, the more they are becoming accepting of homeschoolers. Many college, recognizing that homeschoolers often perform better academically, are even going out of their way to recruit homeschoolers.

Some opponents of homeschooling have asserted that homeschooled kids are sheltered from the diversity of views, being brainwashed with one set of ideas. Again, each homeschooling family is different, but generally homeschooled kids are exposed to the various ideas in society. Each homeschooling family homeschool for different reasons, including some religious and ideological reasons, but this does not mean that the kids do not know that there are other views out there. In fact, because of the emphases on analytical and critical thinking within most homeschool curricula, these kids come out of school better equipped to sort through the many ideas found in the world.